Keeping your car’s stereo receiver system up to date can be a chore. Not all receivers are compatible with all of your other devices, and they may not have the features that you want. It’s easy to get confused, especially when many of the newer receivers claim to have all sorts of newfangled features.

Each of these products has certain strengths and weaknesses, and we’ll expose all of them so that you know which product the best is to fit your car’s needs. 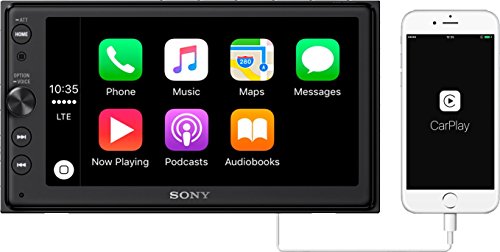 What To Look For In A Car Stereo Receiver

First and foremost, your car’s stereo receiver needs to work with the devices that you have on hand. Not all receivers are compatible with both iOS and Android devices. Many may not have essential wireless technology like Bluetooth.

Likewise, many receivers might not be compatible with older car hardware. It’s critical that the receiver you choose is one that will seamlessly unite all of the different electronic entertainment components in your car rather than make them into a fragmented mess.

It can also connect to satellite radio and handle popular music streaming services like Spotify and Pandora natively.

In contrast, the Sony XAV-AX100 is only compatible with modern iOS and Android devices. If you have an older phone is a Blackberry, you will not be able to use this receiver.

Where it falters in legacy phone compatibility, the Sony XAV-AX100 makes up for it with a high degree of compatibility with car features. If you have cameras on your car, they can be integrated with the unit. Likewise, if you have any kind of speaker setup, it’ll be controllable via the phone.

Controlling your stereo receiver with your voice is an essential feature for the purpose of convenience and also safety. Not all voice controls are created equal, however. In fact, many voice controls are subpar and do not have good voice recognition capability.

These subpar voice recognition modules will be extremely frustrating for the driver. Ultimately, units with bad voice controls will be supplanted by the driver manually adjusting the settings, which could very easily lead to an accident.

But the breadth of voice controls varies a lot from unit to unit, too. Not all units can provide the same range of functionality via their voice controls. There isn’t much point in having a unit with voice controls if some of the most common actions that you need to execute are not voice enabled.

The Jensen’s voice controls are average. The microphone is sensitive to where it is positioned, so its setup is somewhat harder. Likewise, when the microphone is not positioned perfectly, it may be much harder for the system to pick up your voice and take the appropriate action.

Furthermore, the Jensen’s voice control system is not very extensive. You can flip to the next song, call people via your telephone, or stop the music from playing. Simple operations like turning up the volume, navigating to a new location, or halting a call can be difficult.

These problems don’t go away when the microphone is positioned properly, so if you plan on doing a lot more than simple music control with your receiver, the Jensen might be frustrating for you.

In contrast, the Sony XAV-AX100 has superb voice controls. These voice controls are very broad and include the entire repertoire of the Apple Car Play and Android Auto systems. This means that you should be able to control most of the aspects of your car’s sound system – and more – from the unit.

This feature set comes in handy in many different situations. If you’re trying to navigate somewhere and call someone on the phone at the same time, the system can handle it without being scrambled. It’s rare that you’ll need to touch your receiver system to make a change when you use the Sony XAV-AX100.

Nonetheless, once in a great while the voice controls do get a bit garbled. It’s not as sensitive to microphone placement – in fact, it has no external microphone – but if there is a lot more ambient noise than usual, your message might have to be repeated.

On the highway where you will be getting passed by large trucks from time to time, this is not a negligible concern.

The ease of use of your radio receiver is critical. When you’re poking through the menus of your system and trying to set things up in the way that you would like, you’d much rather be back on the road quickly than locked in endless menus trying to figure out how to do what you want.

The user interface on the receiver is the biggest factor in ease of use although the buttons on the front panel of the receiver are also relevant to mention. Small buttons tend to be harder to press, especially on the go.

Likewise, a well-designed graphical user interface can make changing settings quick and easy, whereas an unresponsive touchscreen or confusing menus can make what should be a simple process into a nightmare.

Furthermore, when you’re on the road, a cluttered display can make interpreting the contents of the display very difficult. In contrast, a sleek and streamlined display can make navigation and music control a breeze. It all comes down to the design choices that the manufacturer made.

The Jensen tends to fall on the more difficult to use side of the spectrum thanks to its less responsive touchscreen, cluttered interface, and minimalistic buttons. Thankfully, you shouldn’t need to touch the buttons very often unless you are ejecting a CD or calling up the menu.

Especially during navigation, the Jensen’s interface shows its flaws. It’s tough to see where you should be going among all the other information displayed on the screen. It isn’t that the information is useless – it does tell you relevant information about things around you – it’s just that it’s too much.

You want to be able to opt-in to extra information as you need it rather than have it thrown at you all at once while you are trying to get from point A to point B.

The Sony XAV-AX100 has a minimalistic interface and a more responsive touchscreen. The software is snappier, which makes for less frustration when you are trying to impute a destination or change critical settings.

During navigation, the Sony XAV-AX100 provides the proper mean of information. You won’t be subjected to filtering out the visual clutter while you’re on the road, which is a huge benefit.

The feature sets of the two receivers don’t overlap perfectly, and each has a few which the other does not.

Of these, the legacy hardware compatibility is the most important aspect. If a significant percentage of your music collection is on CDs or DVDs, only the Jensen has the ability to play them.

In comparison, the Sony XAV-AX100 has:

These are software features which can be used to improve the quality of your sound experience while on the go. The mute voice button, in contrast, is a useful tool which lets you turn off the voice controls in the event that you are having a conversation which might trigger them.

The voice mute is a good quality of life feature, whereas the sound modification features are nice extras which you don’t have to be an audiophile to enjoy.

Between the two radio receivers, the Sony XAV-AX100 is the best receiver overall. It has an easy to use display, superior voice controls, a great user interface, and synchs up with other devices in your new car without a hassle. It offers great driving experience, and it’s future proofed for at least a few years.

In comparison, the Jensen is the only real choice between these two if you have legacy hardware like a Blackberry, satellite radio, or CDs/DVDs.

The ease of use of the system is considerably lower, but the broader compatibility makes it a worthy option in the event that you don’t want to upgrade everything else. You may need to replace the Jensen if you get a brand-new car, though – it’s much more old-car friendly than it is new-car friendly.

Now that you know how the two receivers shape up, it’s time to make a decision. Happy driving!