If you want to paint cars, you will need an LVLP spray gun. But buying the best LVLP gun is more complicated than it might seem. The spray guns vary significantly across models, even if they don’t seem very different. In this article, we’ll look at a handful of the best LVLP spray gun options on the market so that you will know which products to check out when you are making a purchasing decision.

By the time you’re done reading, you’ll be able to be a discerning spray gun buyer.

What To Look For In LVLP Spray Guns

LVLP spray guns are tools that you will be potentially using all of the time, but there are many units which are simply not workable. Certain units have consistent jams, inconsistent flow, or a very small capacity which warrants continual refilling.

There are a few essential features which you should care about while browsing LVLP spray guns.

First, your gun needs to be comfortable. You will be holding your gun in an awkward posture for as long as it takes to get the job done. If the gun is too heavy or has an awkward handle for your hand, you will notice.

The more awkward your gun is to hold, the more tired your muscles will feel and the more likely you are to compromise on your painting technique to make do.

Given the heavily repetitive motions that you make while using the spray gun, it’s possible that you could give yourself a repetitive stress injury if you aren’t careful.

Comfortable spray guns tend to have easy trigger pulls that are fairly light, which will avoid tiring your forearm. Likewise, they tend to have ergonomic grips that have a bit of give. The flexibility of the grip allows people of different grip strengths to remain comfortable.

If you plan to be wearing gloves, you will need a gun with a smaller handle because it will be lighter.

The next feature you need in your gun is high build quality. Low build quality spray guns have many of their parts made from plastics. Plastics are not inherently bad for spray guns, but they tend to wear out much faster than all-metal spray guns.

Heavy-duty plastic still wears out very quickly in comparison to even the flimsiest metal, however. Low build quality on the trigger or the nozzle group will create many headaches for you, starting with the prospect of a sticky trigger.

If your spray gun has a sticky trigger, you won’t be able to stop spraying at your will. You will often need to use your trigger finger to dislodge the trigger by pushing it forward after it fails to snap back.

Sticky triggers are the number one build quality issue because low-quality spray guns allow large volumes of wet paint to accumulate inside the nozzle or elsewhere. Because this paint accumulates before it is aerosolized, it is thick. It is also still a liquid.

The liquid’s stickiness is then responsible for the trigger’s failure. 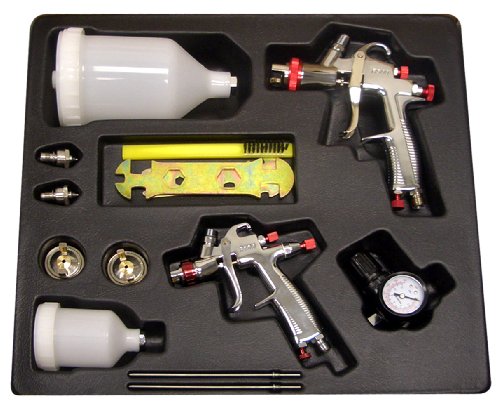 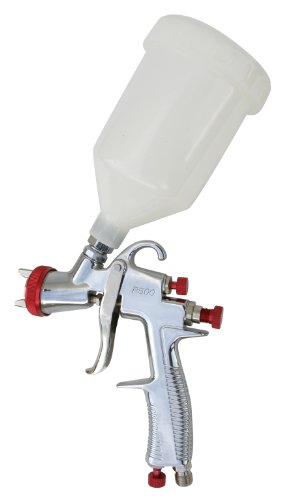 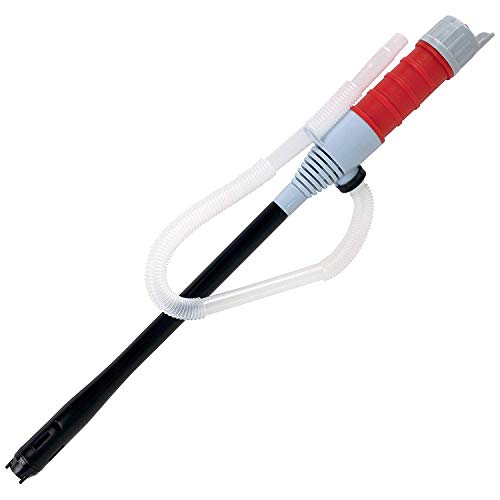 The SPRAYIT SP-33500K LVLP Spray Gun is an easy to use and very accessible gun kit which comes with the extra parts you need to keep painting for a long time into the future with less air consumption.

These are some serious pressures for a relatively simple unit. The air consumption of the air compressor at these pressures is not as much as you would suspect; a mere 2.4 CFM is consumed when the gun is used at its weakest air compressor setting.

The advantages of this spray gun include multiple cup sizes and a few spare gaskets. This means that you won’t need to worry about the failure of a few individual parts because you’ll have a spare.

While technically the kit has two complete spray guns, most people will probably only use one and use the other for spare parts.

The SPRAYIT SP-33000 LVLP Spray Gun is a compact spray gun which is one of SPRAYIT’s older models.

This SPRAYIT LVLP spray gun is a low volume gun that is not as sophisticated as the later model. While you can still adjust the spray pattern nozzle to get a different fluid fan pattern, the SP-33000 has a cup which is somewhat lower quality than the later models.

Likewise, the air pressure capability of this model is much lower than the later models. You can only achieve half as much PSI at maximum working pressure. On the other hand, the fact that it’s a low volume low pressure LVLP spray gun means that less PSI isn’t a major problem.

You will need to use the LVLP spray gun from a shorter range to compensate for the low pressure.

If pressure and build quality aren’t concerns for you, this could still be a good LVLP spray gun. You should count on this LVLP spray gun lasting for a bit less time than others, however.

The Astro 4008 Spray Gun with Cup, Red Handle, 1.8mm Nozzle is a durable and trendy spray gun with a large capacity cup and a drip proofing system which you will appreciate.

The Astro 4008 spray gun has a bunch of quality-of-life features that you will grow to rely on very quickly. The cup volume is nearly one quart, which is greater than other similar LVLP spray guns on the market.

Likewise, the cup’s anti-drip system makes refilling it a much less hazardous endeavor. The unit is a bit heavy because it is made from metals instead of plastics, however. The metal build confers it much greater durability than other guns, but it might be tough if you aren’t very strong.

Finally, the Astro 4008 is very easy to clean. If you plan on using this spray gun frequently, you should appreciate this feature. There’s nothing that detracts from the lifetime of a spray gun faster than crusted old paint.

The FLEXiO 590 Sprayer is a fresh and powerful spray gun which combines ergonomic superiority with a bunch of helpful smaller features. 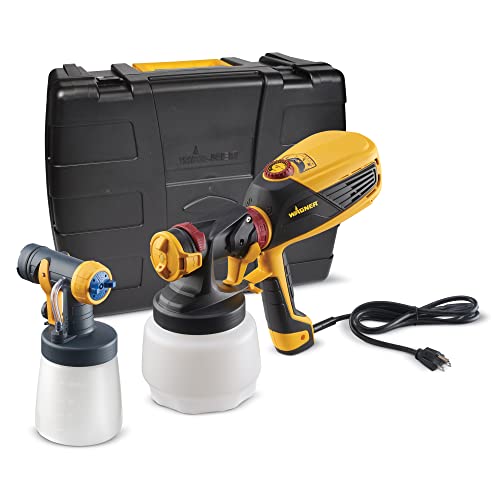 This is probably the most comfortable spray gun you will ever use. The grip is padded, and it also molds to your hand to aid in precise application. For very large spraying projects, you will very much appreciate these features. Likewise, the spray gun is fairly lightweight.

Being lightweight means you won’t get tired while using the spray gun as quickly. The FLEXiO sprayer comes with two separate nozzle and cup arrangements, which means that you can switch between a smaller cup and a larger cup depending on the job and your preferences.

The larger cup has a capacity of over a quart, which makes it very large. Regarding the spray power and volume, you can expect to use up to eight gallons of paint per hour while you are continuously spraying. For practical scale projects, you won’t need to refill the LVLP gun.

The sprayer also has nine different spray speeds, which is a nice extra touch. For most projects, this feature doesn’t add much, but you never know when it might be useful for you. 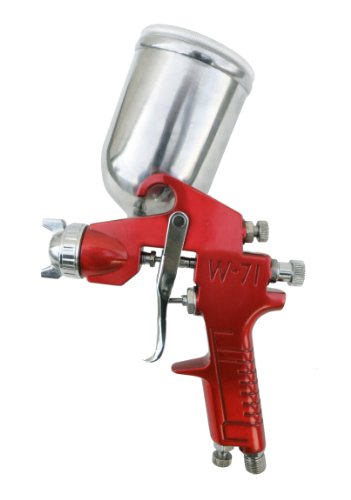 The SP-352 has an all-metal construction. This means that, instead of a plastic cup, its cup is made from ultra lightweight aluminum. The power of this unit is relatively limited, but you will be able to use it for the rest of your days as a result of its build quality.

Every piece of the SPRAYIT has been made minimalistically and functionally. The soft trigger, while simple, is surprisingly comfortable to pull, unlike many other guns which have fundamentally the same design.

With two variations of fan pattern, this little LVLP gun is also surprisingly configurable. Best of all, it’s one of the least expensive spray guns on the market, which makes it a favorite of hobbyists everywhere.

How Long Should My LVLP Spray Gun Last?

Your LVLP spray gun will last for a very long time if it is made with high build quality. You should expect that in a low-quality gun the trigger or the cup will develop issues first.

Importantly, even the highest quality spray guns have a limit, especially if they have been heavily used. With heavy use, you can probably expect a good gun to last you up to ten years.

What Are The Common Annoyances With Spray Guns?

The biggest annoyance which doesn’t directly result in gun failure is dripping. Dripping can occur from any transition point between areas of the spray gun.

In layman’s terms, this means that the gun can drip from the fluid tip of the nozzle, from the point where the cup attaches to the gun itself, and potentially from inside the gun to the nozzle.

The most common point of fluid tip dripping is the nozzle. The connection between the cup and the gun is a close runner-up. Dripping after spraying leaves a big mess, and you won’t necessarily realize it until much later if the drip is small.

Dripping has the potential to discolor your clothes and your floors. You can mitigate dripping by putting down a few mats while you are painting, but a better solution is to purchase a drip-proof spray gun.

How Do I Avoid Damaging My LVLP Spray Gun?

Spray guns are relatively simple. They are also relatively hardy. There are, however, a few areas where it is possible for the user to accidentally damage the gun. First, you should be careful with your trigger pulls.

You do not need to jerk the trigger to spray. Doing so will probably have no consequences for the first several hundred or several thousand times. Eventually, the stress the trigger pull has been imparting onto the point of connection with the gun itself might cause trigger jams.

Likewise, you do not need to screw the various connectors of the gun to maximum tightness. It may be tempting to over-tighten all of the connections to avoid drips, but there is not much utility in doing so.

As long as the system is pressurized and not dripping or making hissing noises everything is screwed in tightly enough. Over-tightening the parts of your gun places stress on the connectors as well as the rest of the parts.

Eventually, this leads to the connector becoming stripped, after which you will have a very hard time tightening the pieces enough to retain pressure. A firm tightness is plenty. There’s no need to opt for ironclad tightness — you’ll have to untighten it as soon as you are done spraying anyway.