If you have an older vehicle, one of the most pressing problems on your next road trip will be that outdated radio. We’ve all been there, and there is a simple solution.

The Walkman Car Connecting Pack is simple and perfect for anyone with an old radio. All you have to do is pop it in like a normal cassette and plug the cord into your device’s headphone jack. It’s essentially the same as plugging into an auxiliary port, and it can be used with any device with a working headphone port. It’s also our top pick in our list of the best cassette adapters for 2020.

Who Would Use this Product?

Most of us have used or needed a Walkman Car Connecting Pack at one point or another. There are many different brands that offer a similar product, but the quality of the device can vary dramatically.

All new cars make these obsolete since a cassette tape isn’t as common as CDs or streaming services. But we can’t all afford new cars.

My first car was a complete beater, but it was also my ticket to freedom. Unfortunately, it was also from 1986, so I wasn’t able to listen to much on the equally beat-up radio. The tuner function didn’t work, and CDs weren’t exactly common yet when the radio was installed.

This little gadget was my only option until I got a new radio. For something so simple, it gave me the ability to listen to anything I wanted. That was a complete lifesaver because I was always on the go, and not having any music wasn’t an option.

So if you have an older car and aren’t interesting in installing a new radio, this is the perfect tool for the job.

What You Should Know

You might be wondering why anyone would bother spending any amount of money on this little device. After all, this is one of the more expensive models on the market, and there isn’t much to it.

I completely understand the question since I’m interested in saving a buck wherever I can.
The thing is, these devices are extremely useful. However, if you don’t spend a little extra to get a good one, they can also be a bit obnoxious. Some people complain that they have an unfortunate whine to them, like a cassette tape that’s been through a lot.

I’ve had some of the cheaper models when I was a teenager, and I can attest to that. I can also say that the cheap ones tend to fall apart quickly. So in the long run, you can end up spending more money when you have to repeatedly buy a new one.

The Walkman Car Connecting Pack is made with high-quality materials and features a silent mechanism. It will self adjust as you bump down a backroad, and you won’t have to worry about hearing the tape. Although you may have to find the perfect volume to make that possible, every radio is different. Some speakers can pick up more static or interference than others.

All you have to do is slide the cassette into an open face cassette radio, which is common in most older cars. Then plug the cord into the device of your choice.

Originally, these were made for portable CD players, such as a Walkman. But now you can use them with your phone, which I find the most convenient. If you have an app for Spotify or Pandora, your options are practically endless. But you can also use it with your iPod or MP3 player. 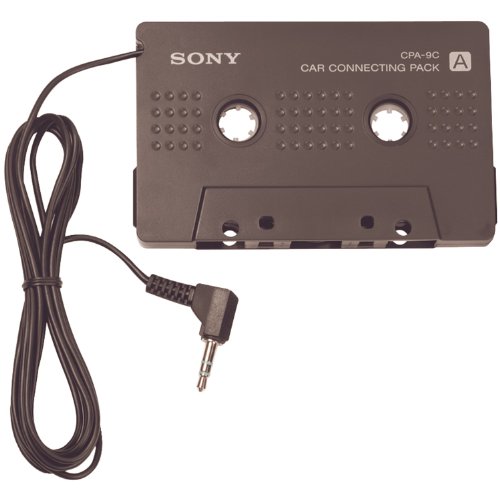 In all honesty, everyone does not need one of these. They are special for those of us with a love for old cars. Or those of us stuck driving an old car until we can afford something better.

Either way, the Walkman Car Connecting Pack is essential if you have a cassette player and no other options. It will give you the ability to listen to your favorite music just like you could with an auxiliary cord.

From personal experience, these are incredibly handy. Although before we had the ability to use our phones or an iPod, we had to deal with a Walkman CD player. I don’t really recommend that since the CD is guaranteed to skip throughout your trip. But it sure does bring back some memories.

I can also say, this little device is well worth the price if you think you’re going to be using it for some time. The cheaper ones might be better if you’re only planning to use it for a short period of time. Maybe when you’re borrowing a car, or haven’t gotten around to buying a new radio.

But if you’re interested in working with what you have for as long as possible, this is the perfect tool for the job. It’s sturdy, reliable, and will last much longer than the cheaper options. It isn’t nearly as breakable, and the cord won’t come loose in a pinch.

Overall, using this gadget is simple and easy. It’s only a matter of popping it into the cassette player and connecting to another device. Easy as pie.

It’s perfect for road trips and your daily driving experience, and it doesn’t wear out. You can count on it working every time, as long as you take care of it. The only problem you might run into is if you yank on the cord at all.

That might seem pretty obvious, but when this ends up under and seat and all tangled up, you can easily damage it on accident. But other than that you shouldn’t have any issues.

In the end, the Walkman Car Connecting Pack probably doesn’t seem like much, it’s so simple. But at the same time, that’s the beauty of it. With something like this, you can make an old radio work with new technology.

The simple and sleek design also makes it sturdy. There isn’t much that can go wrong since this device doesn’t actually have any tape in the cassette. So there are no worries about it eating the tape and ruining the device.

After carefully examining the merits of this handy little device, it’s safe to say it’s well worth the price. It’s easy to use and will solve your problem in a pinch. I give the Walkman Car Connecting Pack a full rating of five stars.

The engine behind editing at Dig My Ride and the brains behind its build. During the day, Brett is a thirty-something dude from SoCal climbing the corporate ladder, but by night, he spends his time contributing to the online world of automotive tech & trends.